One of the most common questions I get asked is how I have been able to build such a powerful interpersonal network. Especially in the worlds of business and entrepreneurship, I have access to just about anyone within 0 or 1 degrees of separation.

Let me share a little secret with you: no amount of LinkedIn spamming or Twitter outreach is going to build you a truly valuable network. Instead, here's what you need to focus on:


One of the worst pieces of advice I hear is that "networking is a numbers game," implying that you need to hit up (spam) thousands or tens of thousands of people to reach anyone of importance. That couldn't be farther from the truth.

There are a number of things wrong with this approach. One is that you are basically saying that there are all these useless people out there who are, by definition, not important. And discounting anyone, including the person serving your steak at the steakhouse, is dangerous. You have no idea what they're building on the side. You have no idea who they're friends with. That person very well could be the next Daniel DiPiazza.

Building a valuable network has a lot more to do with investing in the relationships already around you. It's sort of like picking stocks. You want to look for the ones that might not be seen as extremely valuable yet, but that show potential. People are the same. Your most immediate contacts might not be super well known yet, but if you see them working toward their own goals, chances are they are going to be somewhere special a year, two years, five or ten years from now. And they might have a lot more value to offer now than you give them credit for.

By building meaningful connections early on, you establish that you aren't just interested in connecting with them because they're successful. You genuinely want to help them succeed, and in return they will feel the same about you. Those end up being the most lasting relationships of them all.

2. You Must Have Permission to Introduce


A major rule that everyone violates when it comes to networking has to do with permission based introductions.

Let me ask you a question. How would you feel if someone random showed up at your house, unannounced, that you didn't know knocking on your door? And you later found out that I gave them your address and told them to stop by? At least 95% of people wouldn't like it.

But that happens almost daily to me, and many others with "networking." I get dozens of texts and emails almost daily, with blind introductions where people are giving out my phone number, email, Skype, even office address in some cases, etc. Granted, this is a lot different than a home address, but it can feel equally as intrusive and annoying.

I have adopted this rule from Tim Ferriss, and my networking and quality of relationships have improved drastically. It's just a sign of respect, for all parties involved.

However, for every rule there is an exception.

That said, there are a handful of people on this planet that I have given pre-approval permission to introduce whoever they feel is relevant for me to connect with. But, there are only a handful because I trust their introductions. I trust that they have already pre-vetted people that they are introducing me to, because I do the same for them.

This idea works especially well if you are looking for clients leads. I will give someone pre-approval permission to introduce people that they feel are already vetted by them, or people that they already know well. But that's the only exception, and it must come with an open pre-approval. Don't give out your pre-approval loosely.

3. Remember more than the person's name.


A lot of people try to fake their way up the networking ladder by remembering people's names, and acting as if they've known the person for years.

Remembering someone's name should be the bare minimum expectation. Besides, how are you going to have a meaningful connection with someone if you can't even remember their first name?

But what is far more important is remembering something unique about them. Something that you two share in common, or that you can use as a conversation starter. People aren't impressed when you remember their name--like I said, that's the expectation. What does impress them, however, is when you ask them how one of their projects is going, something they just briefly mentioned to you the last time you spoke. What impresses someone is when you show you are actively listening and can remember details about their life.

If you've ever overhead a "networking conversation" gone wrong, you can remember how both parties just sort of say the same things to each other. "How are you? Good. You? Good. Yup, all good. Things are good? Oh, things are great." It's mind-numbing, and neither party actually enjoys it.

Because the truth is, a conversation that happens for the sake of networking shouldn't sound like a "networking conversation" at all. In fact, as an overheard listener you'd probably assume the two people are long-time friends. That's how much both parties have taken an interest in what the other person is up to.

This is why things like networking events tend to be a wash. Some are worthwhile, but most end up being a waste of time. Why? Because people are more interested in collecting business cards than gaining a true understanding of what someone else is up to, and how they could potentially work together in a way that benefits both parties.

The art of networking has far more to do with getting to know someone on a personal level than just adding more emails to your address book. Going back to the first point, you always want quality over quantity. It's far better to have a real connection with one person than be connected on LinkedIn with 10 people you don't know a single thing about.

Remember: at the end of the day, people do business with friends. 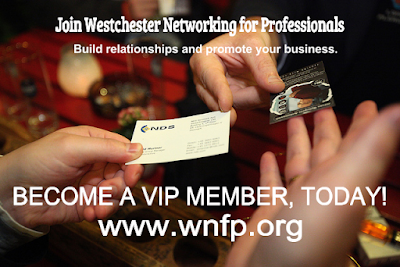 ABOUT WNFP
Westchester Networking for Professionals (WNFP) is a business networking association dedicated to helping small businesses and entrepreneurs develop, expand and grow. We offer affordable opportunities to help create a positive impact and advancement in your business interests and personal quality of life to take you to the next level.